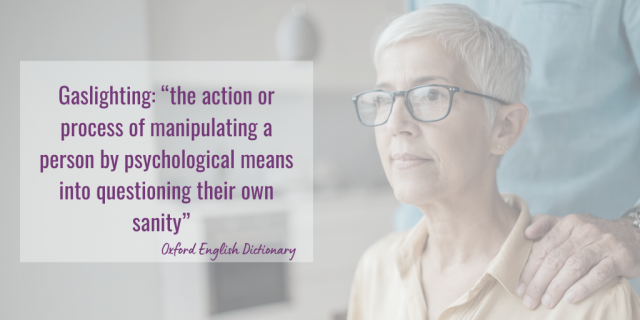 Gaslighting is a manipulative tactic in which a person, to gain power and control of another individual, plants seeds of uncertainty in another person’s mind. The self-doubt and constant questioning slowly cause the individual to question their reality.  The term relates to the 1944 film, Gaslight, which tells a story of a husband systematically brainwashing his wife to the point that she believes she is going insane.

Gaslighting can happen to anyone. Abusers carry out gaslighting behaviours slowly and deliberately so that the person it is happening to does not realise it. The abuser disproves concerns time and again to the point a person does not recognise the reality of what is happening.

You know the person is lying, often and with ease, yet they say they do not recognise this in their behaviour. You begin to have self-doubt, question everything and become uncertain of the simplest matters.

You know what they said. They deny ever saying it. They ask you to prove they said it. You start to question your memory.  Perhaps they were right, they never said it.  Increasingly you question your reality and accept theirs.

3. Using What You Love Against You

4. Losing Your Sense of Self

The gaslighting continues methodically and continuously over a long period of time.  The victim, over time, becomes a different person.  Self-confidence disappears, and the victim becomes a shadow of their former self.  Their reality and being becomes that of the abuser.

A gaslighter will talk and talk to convince a person of their concern for them.  However, their actions will not reflect the words.

A gaslighter will tear a person down, build them back up and tear them right down again. This abusive pattern becomes reality for the victim and the praise associated with the building back up convinces them to think the abuser isn’t all bad.

A gaslighter instils constant and consistent confusion leading the victim to become desperate for clarity.  As the person searches for clarity from the abuser, the cycle continues and the abuser’s power increases.

10. Everyone Else is A Liar

The gaslighter may tell the person everyone else is against them and that everyone is lying. Such action further blurs the victim’s sense of reality and increases their dependence on the gaslighter.

Gaslighting is a form of mental and emotional abuse. The sooner the signs are recognised, the sooner the victim can take steps to find help. If you recognise the signs and believe that you, or someone you know, is in a gaslighting relationship, we can help and support you. Please call us on 01224 593381, email info@grampian-womens-aid.com or complete our online form HERE, for free, confidential advice

When our phone lines are closed, Scotland’s Domestic Abuse & Forced Marriage helpline is always available on 0800 027 1234, email helpline@sdafmh.org.uk or on Web Chat HERE